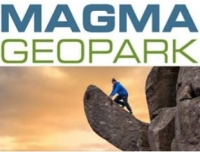 Geology and vine in Bergen 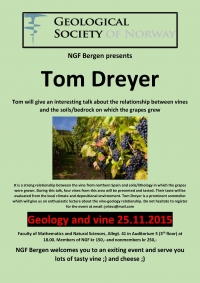 Tom Dreyer will give an interesting talk about the relationship between vines and the soils/bedrock on which the grapes grew.

It is a strong relationship between the vine from northern Spain and soils/lithology in which the grapes were grown. During this talk, four vines from this area will be presented and tasted. Their taste will be evaluated from the local climate and depositional environment. Tom Dreyer is a prominent sommelier which will give us an enthusiastic lecture about the vine-geology relationship.

NGF Bergen welcomes you to an exiting event and serve you lots of tasty vine ;) and cheese ;)

Tittel: «On the origin of mega-thrust earthquakes»

Since the beginning of the 20th century (i.e. 1900) there have been 17 earthquakes with magnitudes equal to or larger than 8.5 (Figure 1). All of these earthquakes, except two, occurred due to rupture along the plate interface in different subduction zones around the Pacific and Indian oceans. Six of these occurred during the last decade, some of which with catastrophic consequences. Especially the largest of these, 2004 and 2005 Sumatra, Indonesia, 2010 Maule, Chile and the 2011 Tohoku-Oki, Japan earthquakes have provided new insights to the understanding of mega-thrust earthquakes and subduction zone deformation. There is now an unprecedented observational data from these events showing the details of the deformational processes in the convergent plate boundaries, not only along the plate interface of two colliding plates, but also within the plate interiors both on the overriding plate as well as the subducting slab.

Mega-thrust earthquakes have some common characteristics. However, the wealth of data available for the latest events have highlighted the details of the rupture process and revealed significant differences. It became now clear that the physical properties of the plate interface in subduction zones are critical in the generation of the mega-thrust earthquakes. Understanding these processes in detail requires multidisciplinary approaches synthesizing a variety of observational data combined with numerical and analogue modeling. Recent studies of the mega-thrust earthquakes have shown that there are methodological issues which may require revisiting some earlier wisdom, but they have also shown the capability of new promising techniques. In the following, we illustrate these challenging issues through various studies conducted on the latest earthquakes with a special emphasis on the 2011 Tohoku-Oki, Japan mega-thrust earthquake (M=9.0).