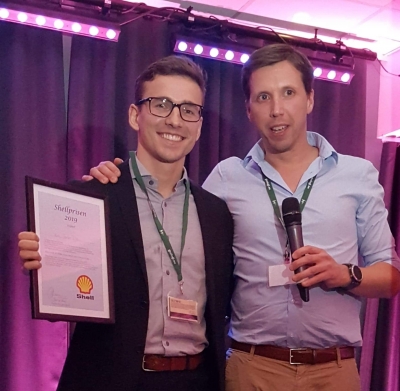 It is with a great pleasure that we here at the NGF Wintermeeting 2019, have identified a presentation that fulfills the requirements for receiving the Shell Award.

The Shell Award is bestowed to a candidate who has finished her/his master thesis within the past two years.

The work must hold a high scientific standard and be presented in a well-organized speech where the results clearly supports the conclusions.

At this meeting we were lucky to have many presentations that all fulfilled the basic requirements and we congratulate the candidates for a job very well done.

One candidate excelled in presenting a complicated geological theme in a clear well-organized speech that logically took the audience from the results over the discussion to the conclusion. Everything was supported with great animations, sketches and field shots and was served with a good deal of humor.  It was presented and “sold” with great enthusiasm while the candidate dynamically used the entire podium. The presentation concerned the structural evolution of eastern Elba and documented a thorough revision of earlier interpretations. His MSc supervisors were Giulio Viola and Bjørn Eske Sørensen from NTNU and the winner is …..

We can only have one winner to the Shell Award still, we would like to honor two other presentation that were in strong competition to Eric. That is Ida H. Gunleiksrud, for her presentation on brittle deformation in central Telemark and Hege Vågen for a talk on the benthic environment in a subarctic fjord with aqua-culture activity.