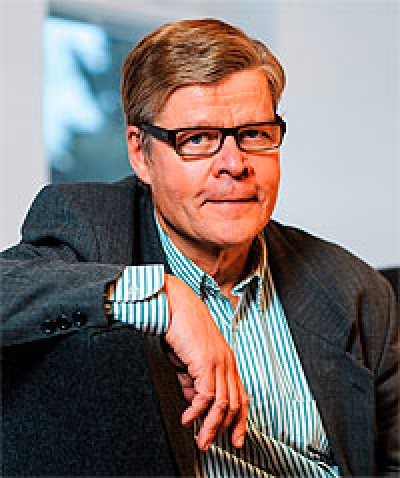 The Nordic Geoscientist Award is presented every second year in connection with the Nordic Winter Meeting. The Award is granted to a Nordic geoscientist who has, in the course of his/her career, been strongly involved in the society around us, as well as in specific fields in the geosciences.

I Oslo the president of Geological Society of Norway, Øystein Nordgulen got the honor to present the award.

In his speech given at den conference dinner on Thursday January 11th the reason for the award was presented.

The Nordic Geological Award is granted to a scientist with a long career in promoting geoscience in society.
The prize is awarded biannually at the NGW meeting, and the jury consists of the presidents of the Nordic geological societies and the directors of the geological surveys.
The 2020 prize winner’s activity within the geological community and in society has been long and remarkable.
The award goes to a person with an extensive publication record including articles in scientific journals, proceedings and books; mainly related to economic geology, mineral exploration, sustainable mining and the minerals sector in general.
For 35 years he was working in various positions for the GTK and as professor in economic geology at the University of Helsinki.
He has served the Geological Society of Finland as chairman (1995) and vice chairman (1994), led the expert group preparing Finland's minerals strategy, and was one of the key persons developing Finland's Green Mining concept in 2010.
Over the years, the prize winner has played an important international role in developing the Fennoscandian Exploration and Mining (FEM) meeting to internationally recognised event, and has also promoted Fennoscandian mineral resources on a global level at PDAC-meetings.
He was involved in the development of European Technology Platform on Sustainable Mineral Resources (ETP-SMR) and EIT RawMaterials consortiums.It is my honour and privilege to present the Nordic Geoscientist Award 2020 to Prof Pekka Nurmi.